Euan Sutherland, Chief Executive of the Co-operative Group, resigned today less than a year after being appointed to the post. 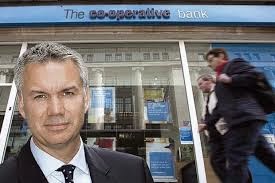 He identified the huge funding gap in the Co-operative Bank and took steps to bridge it.  Sutherland did not cause the problems facing the Bank and the Group.  A series of former senior managers made poor business decisions, encouraged by politicians.

Sutherland was intelligent enough to deal with the backlash from investors to the initial proposal to raise funds from investors.  He worked hard with Mark Taber to ensure that a fair deal was reached and that investors had time to vote.  He also refocussed the brand around its ethical stance.

Euan Sutherland has taken steps to prevent the bank and Group from going into administration or seeking bailouts from the government.  There is a long way to go to raise money, modernise practices and improve corporate governance.  I believe that frontline staff were motivated to follow him on this journey.

The Co-op Group may now own a small part of the Co-op Bank, but the two businesses are inextricably linked and Sutherland has made his mark on both of them.

Leaks to the press about his pay offer and resignation letter send out a very clear message from his fellow directors.  The board is neither united nor supportive of their bright and energetic leader.  They may well have removed any remaining chance that the Co-op will survive.