When I first moved to London, one of my neighbours worked for Tony Benn.  He was Minister of Technology and she described him as an inspiring leader. 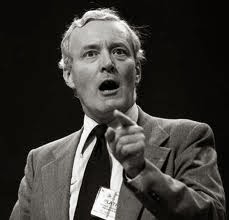 He has been satirised as an old fossil in the last couple of decades.  I saw him when he supported refugee groups fleeing from oppressive military regimes.  He was one of the few politicians with a genuine interest and understanding of these countries.  He recorded all conversations, not wishing to repeat negative experiences of journalists and opponents misquoting him.

He made the biggest impact when speaking about democracy.  In recent decades Western governments have justified military attacks on other countries by claiming to take democracy to dictatorships.  George Dubya Bush, famous for his 'hanging chad election' and sweeping away regulation so that corporations and rich individuals could buy elections, was never a great example of a democrat.  Both he and Tony Blair implied that they received their moral authority from God, rather than the people who elected them.  It was far easier to influence Mr Blair if you were a media mogul or billionaire businessman than if you were a UK voter.

Channel 4 published a video that Tony Benn made to be shown after his death.

We are losing a generation of thinkers and people who act on convictions.  They are being replaced by many facile, venal politicians and their bag carriers, who seem to have minimal experience beyond Westminster and very little interest in anything but power.