Today's post is NOT about a tv series starring Sofie Gråbøl in a retro jumper. 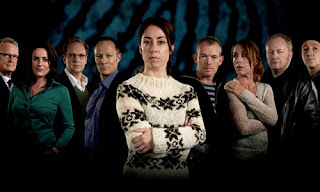 In a previous post I suggested the Danes have done nothing about low carb/high fat diets. I was completely wrong as Denmark produced one of the pioneers in the field. For Scandinavian readers, here is a lecture given by eminent medical researcher, Uffe Ravnskov. (Somehow Danes seem to be shy about visiting my blog, but a warm welcome to Swedish, Norwegian, Finnish and Faroe island readers.)

Here he covers similar ground to Dr Malcolm Kendrick in a previous post. Ravnskov has been challenging the lipid hypothesis since he graduated from medical school in 1961 and influenced Kendrick's work.

50 years have passed and medical science has still not accepted that research has refuted the lipid hypothesis. Governments and medical associations still promote the low fat, high carbohydrate 'healthy diet' guidelines, which may damage health rather than prevent stroke, diabetes and heart disease:

4 Research and its limitations, cholesterol types, gender and risk:

For English readers, here are some interviews with Ravnskov: Tom Naughton submitted reader questions. Petro Dobromylskyj reproduces part of an interview on his blog. Barry Groves has a short interview on his website. 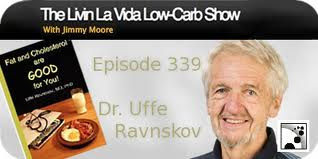 Why aren't Ravnskov and colleague making an impact with their work?

'Most researchers ignore their critics... it's the most effective way of dealing with them.'

'Government people can’t do that (admit that they were misguided) — only the so-called authorities at the American Heart Association and NHLBI could, and I assume that they would rather walk naked on Fifth Avenue than admit that they have been wrong.'

I spoke too soon. Uffe may be doing great things across the Atlantic, but the Danish government has taken a major step to combat the Scandinavian Low Carb/High Fat movement. According to news bulletins Denmark has introduced a Fat Tax. The surcharge is for foods that contain more than 2.3% saturated fat.

Where's the scientific evidence to support this step?
Posted by Suzanne Looms at 12:36