Could England win the world cup this year?

Football, in Germany this July. Here's the team: 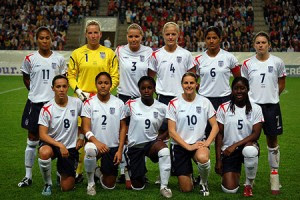 They were runners up in the 2009 UEFA European Championship.

'The road to Germany
England were unbeaten in qualifying Group 5, dropping just two points and conceding only two goals in eight matches. First place in the group stage took them through to a play-off, where they faced Switzerland. Wins in each leg – 2-0 and 3-2 – gave England a 5-2 aggregate victory and sealed their place at the tournament.'

In the UK we are critical of Saudi Arabia for preventing women from driving and consider that we have come a long way in achieving equal opportunity for women. I've spoken to men about the superior achievements of the England women's team and the guys sneer at the boring game that women play. I haven't met a man who has actually watched them play, but never let such a small detail get in the way of a fixed opinion. 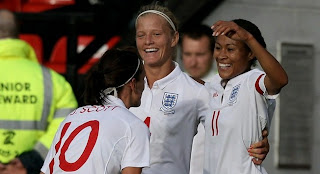 'One of the players, Casey Stoney, tells me that when she was at Arsenal Ladies the women were so far below the men in the pecking order, they actually washed the men’s kit. “I used to work in the laundrette. That’s how I used to earn my money. The men, honestly, they have no idea how spoiled they are. They just have it all on a plate.”'

England men's supporters pay high prices for tickets and kit, but are often rewarded by mediocre performances by the players, who may earn much more money off the pitch through sponsorship deals.

The women put energy and effort into a game they love and are definitely not in it for the money.

'Football is the biggest women’s participation sport in Britain now. Twenty years ago there were 10,000 registered players; now there are 157,000. And it is a different game to the men’s. It’s slower and less physical, but it’s also uncorrupted by money. Talking to the women at Lancaster House, they fall about laughing about the idea of earning £75,000 a week. They’re on £16,000 a year. “But I play it because it’s in my heart,” says Dunia Susi, who plays for Birmingham. “I play it for love.”'

It would be interesting to see Hope Powell, the England women's coach, taking a job for a men's club. She sounds like an impressive leader who can motivate her players to deliver a great performance.

Japan beat USA in the final in a penalty shoot out after a 2-2 tie. France beat England in the quarter finals, which was one stage further than the men in 2010.
Posted by Suzanne Looms at 14:17