In the West we look back on some beliefs and attitudes of our ancestors with derision. The idea that the earth was flat and that a ship would drop over the edge of the world if it sailed too far was challenged by explorers such as Christopher Columbus in his mission to discover the Americas. Galileo defended the ideas of Copernicus that the earth revolves round the sun and not vice versa. He was subject to the Inquisition, banned from writing and placed under house arrest for the rest of his life. At the time the Church was the dominant authority governing acceptable views that affected the perceptions and mindsets of the world around us.

We now have a smug notion that defines our world view as one informed by scientific rationalism and evidence based medicine. We think that we'd never fall into the trap of being cowed into submission by a dominant authority telling us what to think, even if the facts don't support their view.

We've survived totalitarian regimes that banned subversive literature, art, music and ideas. The population of the UK have cast off Tony Blair's attempts to lie to us about weapons of mass destruction in Iraq, though Dr David Kelly was pilloried for his attempts to reveal the truth and lost his life in the process.

How is it then that most of us have accepted a doctrine on health peddled by successive governments that is based on damned lies and statistics?

Step forward Ancel Keys, poster boy of the US government at the time. 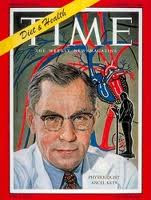 Tom Naughton gives an entertaining animated illustration of the process of fudging the stats in this segment of his excellent film 'Fat Head':

Ancel Keys 'proved' that heart disease was caused by saturated fat in the diet that raised cholestorol levels in the blood. This informed US health guidelines and the shift towards a high ratio of grains in the diet and lower levels of meat and fat. My memory of the food pyramid from childhood has sugar as a healthy substance near the bottom of the chart. A memorable advert for a chocolate bar was: 'a Mars a day helps you work, rest and play' emphasising the benefits of sugar. 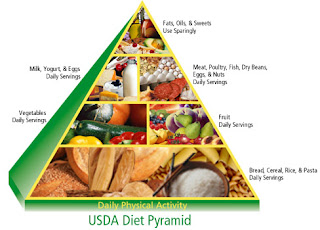 This lipid hypothesis is now accepted as fact and has become the dominant paradigm. Ask anyone on the street and they'll tell you that high levels of dietary saturated fat will kill you by clogging your arteries and giving you a heart attack.

The Framinham Heart Study conducted over the long term on the residents of a small town in the USA is the biggest research project of its kind. It showed the following major findings (from Wikipedia):

1990s
Having an enlarged left ventricle of the heart (left ventricular hypertrophy) increases risk of stroke. Elevated blood pressure can progress to heart failure. Framingham Risk Score is published, and correctly predicts 10-year risk of future coronary heart disease (CHD) events. At 40 years of age, the lifetime risk for CHD is 50% for men and 33% for women.

2000s
So called «high normal blood pressure» increases risk of cardiovascular disease (high normal blood pressure is called prehypertension in medicine; it is defined as a systolic pressure of 120–139 mm Hg and/or a diastolic pressure of 80–89 mm Hg). Lifetime risk of developing elevated blood pressure is 90%. Obesity is a risk factor for heart failure. Serum aldosterone levels predict risk of elevated blood pressure. Lifetime risk for obesity is approximately 50%. The «SHARe» project is announced, a genome wide association study within the Framingham Heart Study. Social contacts of individuals are relevant to whether a person is obese, and whether cigarette smokers decide to quit smoking. Four risk factors for a precursor of heart failure are discovered. 30-year risk for serious cardiac events can be calculated. American Heart Association considers certain genomic findings of the Framingham Heart Study one of the top research achievements in cardiology. Some genes increase risk of atrial fibrillation. Risk of poor memory is increased in middle aged men and women if the parents had suffered from dementia.'

So high cholesterol (ie LDL) increases risk, but high HDL cholesterol reduces risk. The study begins the process of differentiating between types of cholesterol. Other studies have highlighted that particle size of LDL cholesterol is the crucial factor in risk for heart disease, ie small, dense particle LDL is dangerous and large fluffy particle LDL is helpful. A study by Christopher Gardner, PhD provided strong evidence that lipid values improve on a low carb/high fat diet.

Omega 3 fatty acids are protective against risk of stroke.

What is the evidence against the lipid hypothesis?

Dr Malcolm Kendrick explains it clearly in his excellent lecture series to a BMA meeting in Leeds:

Here he discusses genetic risk factors and the dangers of generalising from the patients who show up (as doctors don't see those who stay away).

Malcolm Kendrick gives a robust challenge to the efficacy of statins in protecting against death from heart disease:

The Framingham heart study shows that obesity is a risk factor for heart failure. No definitive evidence is given for its cause.

Dr Robert Lustig identifies some of the disastrous consequences of government health policies in the USA and the particular destruction caused by the introduction of high fructose corn syrup. Lustig challenges the 'calories in, calories out' view of weight gain, explaining that a global epidemic of obesity amongst 6 year olds makes no sense in those terms. He highlights the 'Coca Cola Conspiracy' where carbonated soft drinks are increased in size, contain caffeine and salt masked by sugar, which stimulate thirst and boost consumption of the drinks, leading to a massive increase in obesity and type 2 diabetes. This is a lecture given to adults interested in medical education without training to be doctors:

Jenny Ruhl studied the data on diabetes to take control of her own condition. She has some stark messages about the link between high blood sugar levels (1 hour after eating) and heart attacks.

Governments, diabetic and heart associations still claim that the earth is flat and the sun revolves round the earth in medical terms. All of the people quoted here continue to work in their fields, but seem to have marginal impact on orthodox thinking. Clearly the forces keeping the dominant paradigm in place are stronger than those pushing for change.

Sadly this has a major impact on people's health and well being as well as rising costs to our health and social care services.

If you've visited from another site, you might like to read part 2 here.
Posted by Suzanne Looms at 07:32