As reported in previous posts, the Co-op Bank intends to dig itself out of a financial hole by scalping bond and preference shareholders.

It has emerged that the Co-op Bank lends a large sum of money to the Labour Party at very low interest rates.  This is common practice amongst UK banks and political parties.  Perhaps it's tradition or a political move to avoid excess pressure from political parties.

Unfortunately the Labour Party has been in financial difficulties for many years.  The current move by Ed Milliband to demonstrate that trade unions don't have undue influence on policy, by distancing itself from them and ensuring that members don't automatical pay a Labour Party membership fee is increasing the problem. 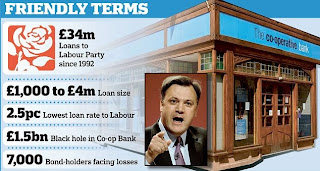 So the Co-op Bank continues to offer the Labour Party a large unsecured loan, in spite of the precarious finances of Labour.  There are no signs that the bank will call in the loan.  Instead they threaten bond and preference shareholders with a very poor deal, saying that the bank may go into administration if they don't agree.

No surprise then that Ed Milliband made such a fulsome speech on 9 July 2012 at Co-op Bank HQ, focussing on breaking up the BIG banks.

'It is a pleasure to be here at the Co-op.  You have always understood that ethics of responsibility, co-operation and stewardship must be at the heart of what you do.  That's one of the reasons why the Co-op Bank has in the last week seen a 25% rise in applications for accounts.  It was your values that I was talking about last September when I said to the Labour Party conference that Britain needed a different kind of economy....'

He introduced Ed Balls as 'a proud Labour and Co-operative MP'.

Milliband set out a plan to build stewardship banking for Britain to follow the good example of the Co-op Bank.
Posted by Suzanne Looms at 04:16