Hans Christian Andersen tells the story of a courtiers and subjects who fawn on the king, admiring his new clothes.  It takes one small child to point out that the king is naked. 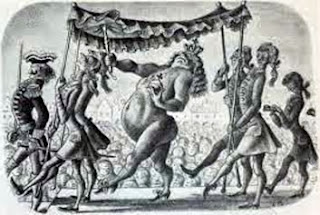 I think of HC Andersen's tale when Ed Miliband, Labour opposition leader, speaks in public.  Who is he?  What policies does he propose?  He repeatedly espouses his parents' values and echoes his former boss, Gordon Brown, the son of the Manse.  This neatly covers the immigration problem, as Miliband Minor can say he is the son of refugees from oppression, without highlighting his party's efforts to curry favour with those who feel disadvantaged by competition with cheap migrant labour.

His current tiff with tabloid journalists brings him a lot of media coverage.  He is repeating previous threats to restrict 'press intrusion'.  One of the loudest voices on his side is one Alastair Campbell.  Mr Campbell, formerly spin doctor to Tony Blair, has a poisonous reputation for 'tackling the man and not the ball'.  He was party to the construction of the notorious dossier that persuaded Parliament to send us to war against Iraq, even though the weapons claims turned out to be fabricated and lifted from a student thesis.  He is alleged to have leaked the name of Dr David Kelly to the media and bullied the BBC over the weapons inspector's account of dealings with Iraq, leading to the death of David Kelly. 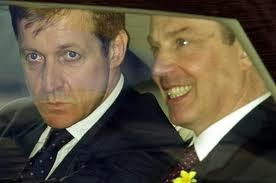 “Campbell has been on his high horse all week saying he never briefed against Tony Blair’s ministers – apart from the time he lost his temper with anti-Iraq leftie Clare Short and suggested Gordon Brown was “psychologically flawed”. Those of us with longer memories know this is spin. In May 1997 when he first arrived in Downing Street, Campbell shocked senior civil servants by telling them that two Cabinet ministers “couldn’t keep their trousers on”, that Derry Irvine, the Lord Chancellor, hated Donald Dewar, the Scottish Secretary. Smirking, he said “Nick Brown, was ever the bachelor” – before he was outed as gay. He went on to hint at the Foreign Secretary Robin Cook’s then adulterous affair with his secretary Gaynor Regan. All that was just in the first month he was in Downing Street and before he went on – as Michael Howard famously told him – “bullying and lying his way across our political life”.”  Guido Fawkes

Miliband Minor wishes to distance himself from the policies and practices of his former boss, Gordon Brown.  He and Ed Balls were bag carriers for the Prime Minister and strongly shaped policies enacted during that time.  He also distances himself from the behaviour of Damian McBride in smearing the opposition and unsupportive bloggers.  Various blogs and publications, such as Private Eye, indicate that he was complicit in some of the nasty tricks used in the past.  The re-emergence of Alastair Campbell, attempting to re-write history and portray himself as a saint, in Miliband's fold is not reassuring.

What does the Labour Party stand for?:

'Britain's democratic socialist party. The values Labour stands for today, social justice, a strong ... and strong values, reward for hard work, decency and rights matched by responsibilities, are those which have guided it throughout its existence.'

Miliband seems to be a little short on social justice and rewards for hard work.  In party conference season and earlier he has railed against bankers and asserted the need to create a stronger, more just system to meet the needs of ordinary people. 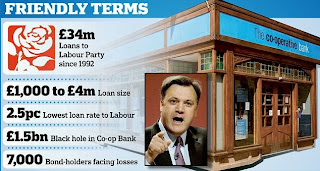 How strange then that he is so quiet about events at the Co-operative Bank.  This is part of the Co-operative Group, which was originally formed by workers for workers (ie labour).  Indeed the Co-op Bank lends the Labour Party significant sums of money at very low interest rates. The Labour Party has been in a very weak financial state for many years, but with the prospect of funds from trade unions reducing drastically, their position is even more vulnerable.  If I wanted a loan from the Co-op bank at 2.5% interest, I'd have difficulty obtaining it.  How interesting that the Labour Party is deemed a good risk.

The Co-op Bank has been in trouble for some time, but taken great trouble to conceal this fact.  Merger with Britannia building society, investment in IT systems and the aborted attempt to buy branches from Lloyds Bank left a large hole in capital reserves.  Members of the Co-operative Group had some cosy meetings with regulators and decided on the amount needed to restore stability and a plan to raise it.

2 things went wrong:  first they decided to take the money from bond and preference shareholders, second they concealed the true financial position of the bank from investors as late as May 2013.  The regulator was a party to the concealment, it seems.  A bank in difficulty needs time to rebuild its capital position, without causing a run on the bank.  However, concealing the information from 2 groups of investors, saying they'll get a take it or leave it offer and then effectively characterising them as risk takers, after reassuring public and online statements all through 2013, is not my idea of ethical behaviour.  The bank implies that investors should accept their offer or the bank will go into liquidation, which is a form of bullying in my book.

The Co-perative Group has obtained a ruling from the regulator that it is not a financial holding company and cannot be forced to bail out its bank.  How strange then that Euan Sutherland, its Chief Executive, was taking action on behalf of the bank and holding talks with the regulator long before he was hurriedly appointed as a non-executive director some time later.

The people most likely to lose their life savings are ordinary working people, who have trusted the Co-operative movement in the UK and chosen to do business with its various enterprises all their lives.  Where is the party of working people in all of this?  I do not hear Ed Miliband speaking up for social justice, rights and responsbilities.

I suspect that the current huffing and puffing about crass articles in the Daily Mail is a substitute for action in support of core Labour Party values.  It has drawn publicity from the Tory Party conference and given Miliband Minor a little sympathy vote.  Much coverage has been given to the spat on the BBC.  Bashing the tabloid press may be Miliband's idea of a substantial crusade to champion.  It seems from press ratings that the population are more concerned about other matters. 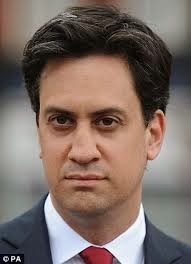 I pity the poor pensioners invested with the Co-operative Bank.  Frankly Miliband Minor doesn't seem to give a damn.