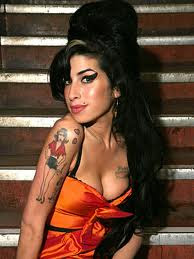 Amy Winehouse was found dead at her home this afternoon. She was 27. She modelled her work on singers like Frank Sinatra and Dinah Washington, but had success with songs she wrote. Here's an old standard:

Amy is one of a long line of musicians who died at the age of 27. There's a myth that some people need addictions to be creative. Survivors tell us this isn't so. Stephen King overcame his drinking and drug taking and continued to write well.

Tony Bennett comments on a recent experience of recording a duet with Amy and his great respect for her talent as a jazz singer. He hints at one of the possible reasons that she drank and took drugs: nervousness.