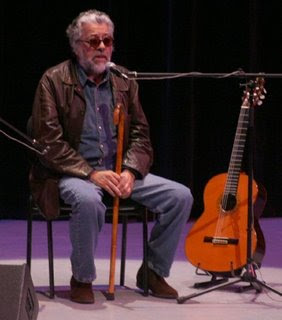 Facundo Cabral, who was shot yesterday in Guatemala, was famous for this song in 1970 protesting about the military junta in Argentina.

After the death of his wife and daughter in a plane crash, nearly being blinded and crippled, surviving cancer he said:

'Siempre le pregunto a Dios, ¿por qué a mí tanto me diste? Me diste miseria, hambre, felicidad, lucha, luces... vi todo. Sé que hay cáncer, sífilis y primavera, y buñuelos de manzana' (I always ask God, why did you give me so much? You gave me misery, hunger, happiness, struggle, lights... I saw everything. I know there is cancer, syphilis and spring, and apple fritters).

How did folk music become part of a revolutionary movement?

People in many countries explored the roots of traditional music in their culture. Songs came from peasants and workers, telling of struggles and identities that were not typically represented in the media or government. In the USA songs were recorded by migrant farm workers and the sons and daughters of slaves. In Latin America, singers performed songs by indigenous peoples and those without access to basic education. This was a reminder that their roots were partly from groups of indians that belonged to the land, not just waves of Europeans who came to make their fortune in each country.

In Georgia jazz became a means of cultural transmission and a call to freedom. Stalin promoted traditional folk music, rather than banning it, because Russians mocked his background and he wanted to demonstrate the quality of Georgian culture. Instead of the usual small choirs, he insisted on large groups of singers.

In Chile when General Pinochet launched a military coup against Salvador Allende's democratically elected government, protestors were herded into the national stadium, including Victor Jara, folk musician. He continued to sing and play guitar during the imprisonment and torture. Finally his captors broke the bones in his hands and shot him. In death he became a potent symbol of resistance.

Facundo Cabral sings here about poverty and his boss.
Posted by Suzanne Looms at 15:12

Email ThisBlogThis!Share to TwitterShare to FacebookShare to Pinterest
Labels: change