Out of sight, out of mind

We use increasing numbers of plastic bags and they disappear into the waste stream. However lots of them aren't biodegraded in industrial compost plants but end up in the natural environment. A huge amount of plastic ends up in the ocean and kills a lot of sea creatures. 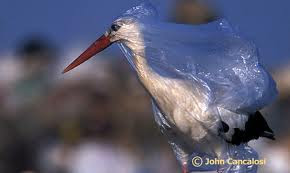 Who cares? It doesn't affect human beings, apart from the tree huggers.

Plastic takes a long time to degrade. In the process it is shredded into smaller and smaller particles that get everywhere. We may ingest plastic when we eat seafood.

Do we want our natural environment to look like a landfill site? 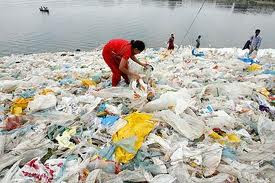 Some people have made a start by making local towns free of plastic bags. Modbury in the UK and Coles Bay in the Tasmania are 2 examples where this has happened.

What else can have an impact on behaviour?

Legislation can affect the types of plastics used in manufacture. Here's a quote from a report by a company called Symphony Environmental Technologies PLC:

'The British Standards Institution published BS8472 on 20 June 2011, which provides tests for biodegration in soil and simulates the real-world behaviour of plastic products which get into the environment and cannot realistically be collected.....

The Commission also said “In the current practice, a packaging product is acknowledged to be biodegradable if it biodegrades in industrial composting facilities in controlled conditions. However, a product that is compostable in an industrial facility will not necessarily
biodegrade in natural conditions in the environment.”

The Commission made the important point that “Advertising a packaging product as biodegradable when in fact it will not biodegrade in natural conditions can be misleading for the consumer and can contribute to the proliferation of littering of products that will persist in the environment.” Symphony therefore expects that suppliers of compostable plastic will stop describing their product as “biodegradable.”

The Commission also said “The current legislative provisions do not allow for a clear distinction between biodegradability and compostability” - highlighting the need for a Standard for oxo-biodegradable plastic, which has now been published as BS8472.'

This was brought to my attention by a skilled City trader. He also noted that management described this as a material 'game changer' for the company, though this had not yet been reflected in the share price.

The United Arab Emirates have now switched to oxo-biodegradable plastics entirely and many other countries may follow.

What could help clean up our beaches and prevent further destruction of marine life? 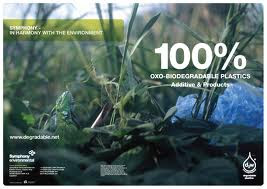