Goran Ekvall pioneered work on organisational climate and creativity. He carried out surveys in Swedish companies such as Volvo, using 10 dimensions: 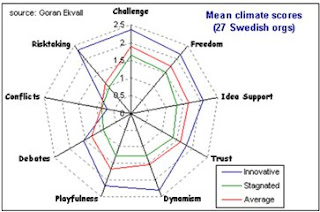 Challenge: from enjoyable and energetic to alientated and indifferent

Playfulness: from happy and humorous - to dull and serious

Conflicts: from debate with insight - to open warfare

Risk taking: from acting on new ideas - to detail and committee bound

Ekvall argued that one size does not fit all and that the climate varied according to the task.

Ekvall and Jouko Arvonen challenged conventional thinking on leadership styles, which distinguished between concern for task and concern for people. They proposed a third style based on change orientation.

Change-centred leadership is defined in terms of vision, creativity, action for implementation and risk-taking. Arvonen suggests that the new style has emerged as a result of new work challenges.

Arvonen studied 'post-bureaucratic organisations' and emphasised the need for action. Much depends on whether the soft dimensions of Ekvall's model are incorporated by a change-centred leader. Unsupportive, critical and blaming leaders may still be creative, visionary and active risk takers, but the climate could still bring threatening thunder clouds to the team.
Posted by Suzanne Looms at 08:49