Wine developed in different ways around the world. France was proud of terroir and the notion that the region and local conditions affected the character of the wine. The New World focussed on grape varieties and interesting blends.

Globalisation led to shifts in production. Australians parachuted in to France to help modernise the wine industry. Countries creatively swiped ideas from others on how to produce better wines. Technology drove many changes. The increasing power of supermarkets in the UK led to buyers advising producers on blends that would suit UK tastes, and with a large customer base, their arguments were persuasive.

Some French wine experts moved to London, claiming that British people were more adventurous in their tastes in wine than the French.

One of these was Master of Wine Isabelle Legeron. She argues that globalisation has led to a homogenised market, which has become saturated, so that wine sales are falling. She is particularly critical of the focus on technology and additives to fix poor wines, rather than attention paid to the quality of vines and grapes. Isabelle is an advocate of natural wines:

I met Isabelle at a screening of a documentary on Georgian kvevri wines, which are made in large earthenware jars sunk in the ground. 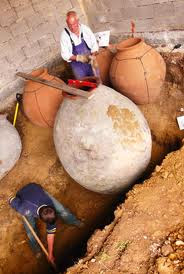 The character of these wines is very different from conventional bottles. We drank golden wine, which was white wine fermented on the skins. Another producer offered glasses of a stunning deep red wine poured from a decanter. This tasted of fresh blackberries or elderberries. The champion of this particular red wine told me it was being added to a blend to suit European tastes before he rescued it for sale as a single wine.

Georgians believe they were the first in the world to make wine and maintain traditions going back a thousand years in producing unadulterated, natural wines. Some Georgians are ashamed of Isabelle's tv programme, because it shows old delapidated farm houses and peasants with few teeth. They would prefer to focus on the modern side of the country, thinking that this would help export more wine and attract tourists. Sadly this would lead to more generic wine entering the market chasing prices and profit margins to the bottom.

A source of innovation in Europe is dissatisfaction with the status quo in food and drink. In 1986 Carlo Petrini founded the Slow Food movement in Italy to promote traditional methods of growing and producing food suitable to the local environment and regional tastes.

Georgian kvevri wine fits easily into this movement, valuing flavour and naturalness over efficient, high tech production, which leads to globally identical food and drink. Georgia still has a large number of grape varieties unknown anywhere else in the world. Unfortunately kvevri makers are growing old and young people are not interested in learning the skill of crafting these large clay pots.

Peters and Waterman would tell Georgians to stick to the knitting and not mess about trying to copy wine styles and production methods from other parts of the world.

Isabelle is determined not to allow traditional kvevri wines to disappear in Georgia just when Westerners are learning to love them.

Here is the trailer for her programme:

In July 2011 there was a 3 day symposium in Tbilisi on kvevri wine making.
Posted by Suzanne Looms at 14:29