A small club gets knocked out of the Premier League. Problems continue and the club teeters on the edge of bankruptcy until a consortium buys it out. Negotiations stall over a move to the old Crystal Palace site from Selhurst Park. A new manager joins.

Every year Crystal Palace FC start the season well and then seem to falter. Fans begin to reconsider the idea of renewing their season ticket, given that the rewards seem to be outweighed by the costs.

At the other end of the scale, Manchester United go from strength to strength. Sir Alex Ferguson has managed the club for 25 years and the cupboards are full of silverware. Despite the buyout by the Glazer family and subsequent financial transactions that left the club with significant debt, Ferguson has ensured the security of ManU for the forseeable future through his long run of success.

On 30 November Palace played ManU and won 2-1 by Glenn Murray's goal in extra time, strengthening their chance of a place in the final of the Carling Cup. ManU may well have played the B,C or D team, because of more important fixtures coming up, but they still had substantial financial assets on the pitch in the form of overseas signings, and still lost. 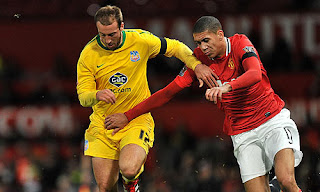 This is a great boost to Palace and their dispirited fans and encourages people to trust in Dougie Freeman, the new manager. 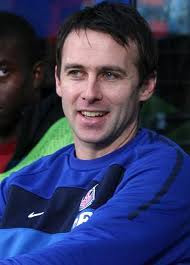 Denmark showed how minimal expectations and determination can produce results, when they won the European Championship in 1992 (replacing Yugoslavia, who couldn't play because of the Bosnian conflict.) If you have nothing much to lose and everything to gain, then it's possible to beat impressive opponents, if you shift mindsets and persist. The psychological battle is the hardest to win, the rest is down to persistence, effort, skill and luck.

Someone had some fun with this spoof: