At regular intervals the media announce that today is International ***** Day (insert worthy cause in the gap.) It's easy to be cynical and assume that a committee of retired bureaucrats have devised this as make-work activity. Little seems to change.

The same reaction occurs when emails circulate about World Peace Day on 21 September. The story of how this came about is intriguing. 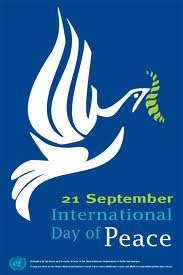 Actor and filmmaker Jeremy Gilley decided to campaign for the idea of one day of peace and non-violence. Gilley was frustrated at the relentless level of conflict in the world. He was influenced by the early death of his grandfather, who, as a prisoner of war, witnessed the bomb in Nagasaki and had lasting health effects from the radiation. Gilley chose the date because 21 was his grandfather's favourite number.

Gilley had no money. He wrote to everyone he could think of to promote the idea. He travelled all over the world filming and listening to ordinary people in war zones and the difference that peace might make to them. He decided to build a case and make it stronger and more detailed.

Finally UK and Costa Rica proposed a motion to the UN General Assembly on 7 September 2001 and it was passed unanimously. Kofi Annan invited him to a press conference at 8am on 11 September, but the attack on the twin towers make it impossible.

Gilley persisted and toured with his film. People in Israel sneered that it's just symbolism, after watching Gilley's film. He recognised that he needed tangible results to convince people.

He came to understand the 4 pillars of success:

- A great idea
- A constituency
- Finance
- An ability to raise awareness

His profile was too low to make an impact, so he recruited the actor, Jude Law. Together they went to Afghanistan and spoke to all organisations involved in the conflict. A major problem was the safety of humanitarian workers in the country. After Gilley returned home, a letter came from the Taliban agreeing to a ceasefire on 21 September.

On that one day of peace 1.6 million children were vaccinated against polio as a result.

Later it was announced that there was a 70% reduction in violence on that day.

Gilley then aimed for a Global Truce on 21 September, with the idea that a 70% reduction in violence could be possible everywhere if it had been achieved in such an intractable situation as that facing Afghanistan.

One of his mentors told him that it's not going to come from the action of governments. 'It's all about individuals - you and me, partnerships, local businesses - working together.'

In Pinchot's terms Gilley has followed most of the commandments, particularly doing any job necessary, finding people to help him, running in his own race and being true to his goals.
Posted by Suzanne Looms at 13:08