What drives innovation? Ray Rothwell constructed 5 models to describe how the innovation process has developed over time: the Technology Push Model, the Market Pull Model, the Coupling Model, the Integrated Model and the Systems Integration and Networking Model.

There has been a steady decline in sales of newspapers in the UK and growth in the range of free newspapers distributed morning and evening at railway stations. Television and radio news compete with print media to offer faster delivery of breakings stories and developments. We have become accustomed to 24 hour news. Improved technological capability of the internet offers us increasing access to free news via search engines and several newspapers have embraced the medium enthusiastically, without considering the risk of substantial loss of revenue and fall off in print sales. Blogs offer products to a niche market, providing coverage from war zones, from people with greater access to politicians, or from those with a specific interest. Traditional newspapers sometimes seem to be behind the curve in the content provided. Customer needs have shifted: People have become accustomed to receiving free news via the internet, which has increased the problem of selling 'old news' through print media. Increasingly those on the move receive information through mobile devices (phone/smart phone, such as the Blackberry, laptop/tablet computer, such as the iPad). Content and visual material is no longer guaranteed to appear in A4 size and our attention span may not stretch far in this busy world.

Rupert Murdoch bucked the trend and decided that readers should pay for online content. Since July 2010, for example, readers who don't subscribe to the print edition of Times newspapers are required to pay for online access.

How well did the Times paywall succeed? Not very well so far. Just because NewsCorp has the technological capability to block those who want a freebie, doesn't mean that readers will pay up when free access is denied.

When readers expect free content, how can news media pay for itself?

Free newspapers depend on advertising revenue to fund them. Some blogs rely on advertising or sponsorship to provide an income stream. One blogger, Paul Staines (Guido Fawkes), went from bankruptcy to profitable business owner by running Message Space, a company that sells ads on political blogs across the spectrum. Advertising revenue depends on the volume and desirable market segment of the readership. Technology can deliver some of this information in real time, particularly geographic location of readers and their focus of interest on the page, as well as how they arrived at the specific story. Web sites may gain additional data if they can encourage readers to register. One method is to encourage people to sign up for email alerts for the latest stories or for access to a members only area with additional benefits.

Are all paywalls a complete failure? Not according to commentators.

Success depends on a tricky balance between free access and payment. If some content is free, then content is listed on search engines, providing visibility and access. If no content is free, then publications slip off the internet radar and readership plummets. One model is to provide content to subscribers for a month and then allow free access when it's no longer 'fresh'. Another model is to provide metered access, so that readers may see part of an article for free or a small number of articles per month before being asked to pay. Much depends on the perceived value of the content. Journalists might complain that blogs don't have to obtain independent verification of stories and may be subject to bias, but recent news about the fall off in registration with the Press Complaints Commission undermines this argument.

Some news outlets make most money by selling goods, rather than content. City University of New York did a study of new business models for news which revealed that the Telegraph earned 1/4 of its profits last year from merchandising direct to readers(and became the largest UK retailer of coat hangers.)

A different type of paywall model is offered by Bloomberg. Bloomberg LP originally offered specialist financial data via a Bloomberg terminal (custom hardware). This service now runs as software with 3 levels within standard computers. Bloomberg has seen off competitors offering lower priced alternatives and continues to thrive. The niche is within the lucrative financial sector, where accurate, reliable, timely 24 hour news is essential. Customer service is another feature that explains customer retention. Bloomberg have also mastered the art of repackaging information for various audiences and providing a range of free and paid for content across its media outlets.

Rothwell's work focusses on manufacturing innovation. In the shift away from print media, innovations in digital processes and printing technology become increasingly marginal in the competition for market share. Rothwell highlighted the increasing importance of a powerful electronic toolkit in design processes and management information systems. Rapid innovation has become essential. In this example, the internet is becoming the central focus of development, whereas the medium of delivery may be computers, television, radio and a range of mobile devices.

People will pay for quality content that they value. Increasingly this is a specialist niche market, where the provider offers free tasters so the reader knows what is on offer. High levels of customer service are essential for premium price/value products.

Innovation proceeds at an accelerating pace and all news producers need to keep an eye on future trends to avoid stagnating in old technology or bankrupting the company by blind adoption of the new. 'Follow the Free' may be one philosophy in changing times. Andy Grove, former CEO of INTEL, summarised another view neatly in his book: Only the paranoid survive. 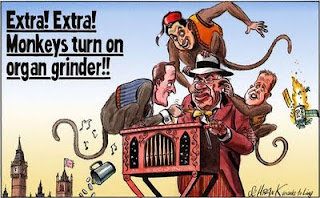 The News of the World has folded and Rupert Murdoch is under pressure from politicians in the UK and USA. Perhaps UK politicians like the idea of haranguing the media after the exposure of their expenses fiddling. It's curious that we have comments from saintly politicians such as John Prescott, who was revealed to have had sex with a civil servant when he was supposed to be deputy leader of the government and Chris Huhne, who is alleged to have forced his wife and son to lie so that he did not lose his driving licence... yes the same Chris Huhne who ran an election campaign promoting himself as a fine upstanding family man, when he was having an affair and planning to leave his wife. Our statesmanlike former Prime Minister, Gordon Brown, gave a passable imitation of a 5 year old stamping his feet in the school playground when giving a recent (rare) speech to Parliament. Ed Milliband has his own links to News Corp.

The London Mayors (past and present) have provided a comedy routine on their relationship with News International.

The outlook for print media is gloomy and it is unlikely that former readers of TNOTW will turn to other newspapers. Rupert Murdoch will survive and continue to innovate in all forms of mass media.
Posted by Suzanne Looms at 06:31