More than my job's worth

A former client of mine happily dropped his people management responsibilities for a job in IT. 'Machines are easy. People are awkward and I've had enough. I want to sleep at night and leave the hassles to someone else.' I know how he feels.

This seems to be a common sentiment amongst my clients when we discuss a forthcoming creative problem solving workshop. I hear thumbnail sketches of staff including the awkward union shop steward and the crusty old supervisor who blocks any change.

The strange thing is that most of these people show a different side of themselves during the event. The crusty old supervisor is often the guy who understands the power of a metaphor and is the first to offer ideas for turning whacky analogies into real world solutions. The awkward union shop steward may blame management and state that it's their responsibility to fix the problem, but can easily be prevailed upon to list specific ways that he can move the process forward.

One of the factors influencing a positive outcome is the fresh eye. As the facilitator, I turn up without any preconceived notions about participants and am willing to provide space for them to be who and how they want to be during the event. I can empathise with crusty old supervisors and resistance to change. I've recently made a move to a new IT system with one client organisation and moaned about it before and during the change. I am really happy with it now that it works and offers greater functionality than its predecessor. That didn't stop me dragging my feet. I've thought about blogs for a long time, but a combination of my colleague, John Gaynard, and a client organisation's system pushed me into starting this blog. I know several entrepreneurs who are Foot Draggers and adopt innovations at a later stage, but bypass some of the early problems by doing so.

The other mechanism I use to control malcontents is an adaptation of certain techniques. I tend to add a column that asks people to specify what they can do to bring something about. If the union shop steward states that management should do x, y and z, then I want them to specify what they will do to ensure this happens. 'What can YOU DO to make this happen? How will YOU take RESPONSIBILITY for this outcome?' It may be irritating for them, but they do it.

I then set up a system to monitor actions taken. Typically I'll arrange a meeting where representatives from the workshop follow up subsequent work. It's curious how embarassed awkward union reps can be when confronted with the fact that they are the only participant who has done nothing since the workshop. That tends to silence opposition to the change.

I believe that human beings aren't as hopeless as we often think and they are capable of great things. However we have to manage the process, or our fears become a self fulfilling prophecy.

One example, demonstrating how ordinary people can do more than we expect, is the Rebuilding Together not for profit organisation. RT brings together volunteers to help maintain affordable housing and revitalise neighbourhoods by providing home repairs and modifications. 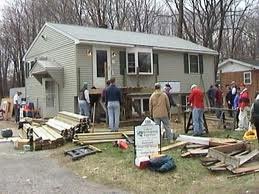