It's not that easy being green

For the purposes of this post I'm side stepping the climate change debate.  We have a big enough challenge ensuring there are energy and natural resources for generations coming after us on Planet Earth.

I live in Croydon, an unfashionable area of Greater London that lies South of the capital on the way to Gatwick airport.  It is both a borough and a town called Croydon (to confuse people driving to the areas.)  The town of Croydon is sometimes called the Manhatten of South East England because of the number of high rise blocks on the skyline. 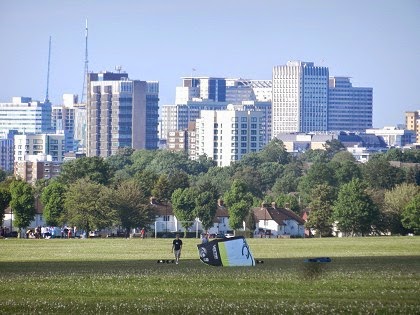 In recent years many tower blocks are being demolished to make way for newer replacements.  Some of the demolished buildings were built in my time in the area.  If it takes more materials to build new rather than renovate and retrofit old buildings, why are so many recent apartments and office blocks being torn down?

The simple answer is money.

It costs more to renovate, because full VAT (value added tax) is charged on retrofitted building and zero rate on new build.  The greener option is not on a level playing field with the alternative.

I'm not making a party political point here as all the major parties have followed this formula and chosen to cosy up to the large construction companies and property developers. 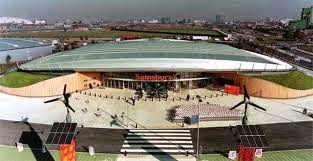 Let's look at another example.  The supermarket firm Sainsbury commissioned a new branch in Greenwich, which was designed and built to high standards of energy efficiency and eco-friendliness.  Later it decided to sell, but placed a caveat in the contract that no rival could use the shop as a supermarket.  This led to plans to demolish the building.  Campaigners worked to save the store.

Eric Pickles of the Department for Communities and Local Government (DCLG) has decreed that no local council should raise local building standards beyond those laid down by central government.  He has blocked new schemes that would significantly increase the development of zero carbon homes in South West England.  His argument is that this disadvantages building companies. 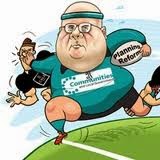 In my view there are 2 reasons why Mr Pickles is wrong:

1)  Progress and improvement have been made through innovation and deviation from the norm by pioneers.  Without experimentation and trail blazers we will continue to waste energy and resources.

2)  When Croydon council planned massive redevelopment of the town centre, the Head of Planning was clueless about energy efficiency and sustainable building.  Local councillors told me that higher standards would be too expensive.  I asked staff of large building companies about this.  They told me they were building similar schemes to higher standards in Greenwich.  Did it cost more?  No.  Why did they build to a higher standard in Greenwich?  Because Greenwich council asked them.

If political parties are serious about their Green Credentials for the coming general election, here are some fundamentals:

2)  Maintain building standards and encourage local councils to go beyond them.

Anything else is Greenwash.