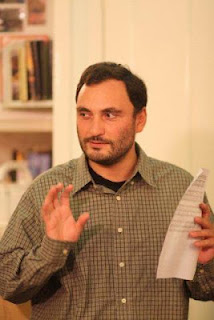 Gigi had a tough start.  His family were killed in a car crash when he was about 15 years old. 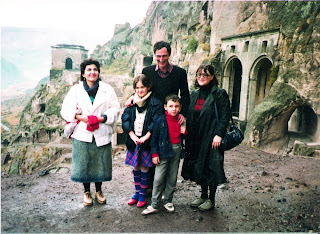 Helen Chadwick, who had hosted workshops in England for his father, Edisher, started a choir to raise funds to pay Gigi's medical bills and keep Georgian song in the mouths of Brits. 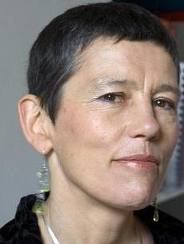 Gigi had a bewildered and lonely life, dealing with health problems and economic difficulties.  He struggled to follow his father's path as an ethnomusicologist, leading choirs, resurrecting lost Georgian folk songs and refusing to settle for a secure day job.  Edisher taught children and developed Amer-Imeri choir to sing freely in the old tradition, without a conductor.

The main choir, Mtiebi or morning star, developed Edisher's vision of an ethnomusical theatre, presenting a range of songs in their cultural context.  Here's the original choir.  (Edisher and Gigi are 3rd and 2nd from the right).  When Edisher died, Koba Khutsishvili led the choir and helped them stage a new ethnomusical theatrical performance. 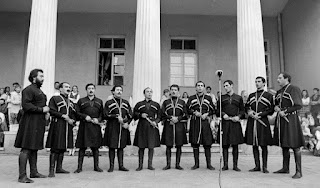 Sadly Koba also died suddenly at the end of 2002, after annointing Gigi as the next leader, despite his youth and frail health.   Edisher had persuaded Mtiebi to develop a performance of a village wedding, showing traditions and songs for the celebration.  Under Gigi's leadership this was made into a DVD.

In recent years Gigi had put his life on an even keel.  He was happily married and had a child.  He published a learned volume on Georgian ethnomusicology.  He was earning a regular income and acclaim amongst colleagues.

His death was a shock to everyone and was mourned at his funeral on Thursday by many.

'So what?' you may ask.  This is a common story amongst cultural leaders in developing countries.

There is something different about Garaq'anidze father and son.


Edisher taught workshops in the UK with a passionate fervour that infected participants. He encouraged people to start their own choirs and gave them confidence to do so.  He had a rare ability to take people with little or no musical education and teach them to sing complex Georgian harmonies in a short time.  Edisher went beyond the tradition of separate male and female choirs, encouraging people to maintain Georgian song traditions by singing in whatever forms they could.  He was well aware of the risk Georgian culture faced under Russian occupation and strongly believed in disseminating traditional song widely in order to keep it alive.  Edisher reminded us of the roots of Georgian polyphony, with songs that were sung from birth to the grave and accompanied all parts of everyday life.

His work established a love for Georgian folk song in the UK that has persisted for decades.  4 friends,  Helen Chadwick, Frank Rozelaar-Green, Venice Manley and Michael Bloom, continued his work in various ways. 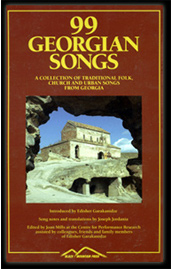 Today there are many UK choirs that sing Georgian traditional songs, whether they know of Edisher or not.  His work on collecting regional polyphony was published posthumously as '99 Georgian Songs'. 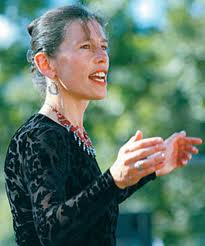 Helen credits Edisher with inspiring her to start 'Sing for Water', giving her confidence to lead huge groups of people in singing together to raise funds for clean water in developing countries. 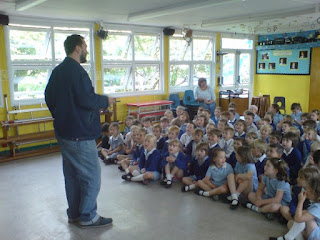 Gigi also taught workshops in the UK and brought Mtiebi to perform here.  His warmth and humility helped him connect with adults and children alike, leaving a deep impression on all  who studied with him.  He was generous to foreign choirs travelling to Tbilisi, helping them rehearse and showing them warm hearted Georgian hospitality.

Both Edisher and Gigi were devout followers of the Georgian Orthodox Church, but they also recognised that many Westerners wished to feel inspired by Georgian church music without accepting church dogma.  They understood that Western choirs might sing church songs in secular concerts and did not insist on reserving church music solely for church services.

Gigi also took a pragmatic view of traditional customs.  He told me that it was fine for us to develop a more relaxed UK version of the Georgian supra, without strict adherence to the rules of toasting.  He believed that customs and culture evolve and shouldn't be kept in a sterile museum, but adapt to circumstances. 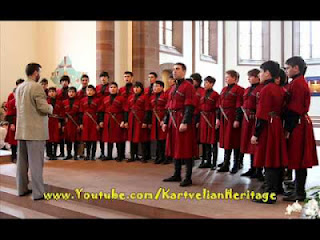 Both father and son believed in Georgian song and the importance of keeping it 'გული და სული  Guli da suli' in the heart and soul of people, so that it wouldn't die.  Their tireless work abroad led to increasing participation of foreign choirs in the bi-annual symposium on Georgian polyphony at the Tbilisi Conservatoire.  This had a major impact on Georgia and inspired a resurgence of interest in Georgian traditional song amongst children.

A significant part of tourism to Georgia is connected with Georgian song.  Nana Mzhavanadze and Madge Bray take groups to the Caucasus mountains each year to learn songs from village people.  Profits from the trip go to developing infrastructure in the village.  Edisher and Gigi opened the door through which others followed. 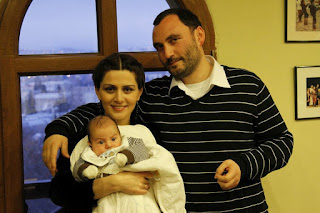 How will Gigi's wife and son survive?  What impact might Ilya Garaq'anidze have on Georgian traditional song by 2042?

I have no idea.  I hope they have a happy and healthy life, despite the loss of Gigi.


May Georgian song continue to be the secret weapon of Georgia, binding many people to it, heart and soul.

Thank you Gigi and Edisher for your hard work, sacrifice and love.  May you rest in peace.
Posted by Suzanne Looms at 15:09