Me and my shadow 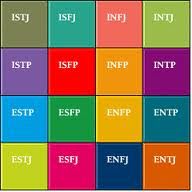 As I see it, the ultimate purpose of taking psychological inventories and analysing our style is to improve how we relate to other people. Merely learning to label ourselves and other people adds little to the sum of human knowledge. 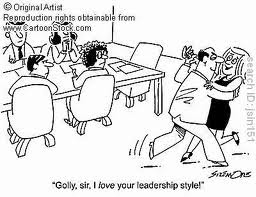 Daniel Goleman's work on emotional and other non-standard forms of intelligence encourages us to distinguish between awareness and management of self and relationship with others. Our personal style shows up in patterns that may or may not blend well with others and have a positive impact on communication and relationships. 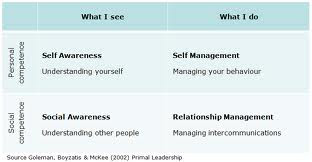 Jung's archetypes, the inspiration for work on modern style inventories, included the notion that we come to terms with some of our weaker dimensions as we go through life. He noted that the weakest trait was our shadow side and likely to rise up and bite us on the backside at awkward moments in life. If we don't recognise the shadow, develop self awareness and do something about it, we may be stuck with patterns that are destructive and don't serve us well. The intention is not to get us to change personality, but work to our strengths. If we have a wider choice of responses and behaviours, we may defuse unnecessary conflict and misunderstandings.

My colleague, Kieran Duignan, is breaking new ground with what he calls Behavioural Diplomacy, building on the work of Scott Benjamin. He has developed a questionnaire (to be used with clients and their close network) to illuminate those dark corners. His portrait of behaviour patterns may not make comfortable reading to clients. With time and changing circumstances, client motivation may shift and bring them to the table ready to work on managing themselves and relationships differently. Mergers and acquisitions with their job insecurity or changing demands from new management can be one catalyst for a shift in motivation. 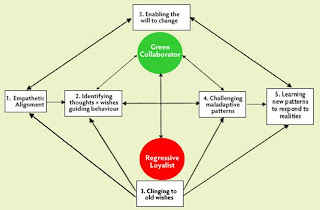 Richard Fisch, co-author of a seminal book on change, who died last month, founded the Brief Therapy Centre at MRI in Palo Alto California. He took a revolutionary approach to mental health research, focussing on the problem that the client was most concerned about rather than telling the client what he believed was wrong with them (current practice in psychology at the time.) This solved problems of 'resistance' or lack of motivation for change, as sessions dealt with major concerns brought by the client. Reading some of Fisch's case examples, there are some clear shadows or areas that don't work in his client's dealings with others, of which they seem totally unaware. Fisch is able to frame them as skill deficits and work successfully with the client to change patterns in the service of their desired goal.

In discussion with Kieran Duignan on his work on Behavioural Diplomacy, I reflected on my experience in some organisations where senior male managers with sub-optimal patterns sometimes appoint a woman in a floating role to act as a buffer between them and humanoids. The senior managers showed minimal interest or awareness in their own style, but felt the need for someone to deal with what they regard as trivial, routine and time consuming people issues.

Many years ago I talked to the Managing Director of a major UK agency supplying temporary secretarial staff to offices around the country. His partner, an Executive Secretary, was launching a work-to-rule of people in her position to campaign for better recognition and reward for their services. Thus, for example, when the chief executive told her to respond to a client requesting a meeting "Tell him to p*ss off, I'm going to play golf", she would do exactly that, rather than relaying a more diplomatic message to the caller.

Perhaps the Executive Secretary of decades ago has transformed into non-Board roles such as Strategy Consultant or Development Analyst, but always held by women. Maybe senior women who are criticised for being too aggressive or lacking sufficient people skills are those who don't have a buffer to deal with those pesky humanoids.
Posted by Suzanne Looms at 14:48